Posted at 13:20h in Articles by julie 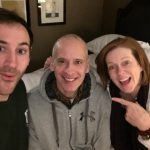 This week is Random Acts of Kindness Week! According to my local Chamber of Commerce where I first saw the announcement, this proclamation is a worldwide movement serving as a reminder to simply be kind. It’s kind of sad that we need a movement to remind us of that but it speaks volumes about what we’ve become as a human race. Or more importantly, where we’ve been. At any rate, when it comes to kindness, you can bet I’m a big fan.

This blog post is not going to provide you with a list of kind acts you could consider nor will it be a summary of kind acts I’ve performed for others. Rather, I wanted to use my air time to share with you a time when the kindness of others brought me to my knees.

Five years ago my husband made the brave decision to have Deep Brain Stimulation surgery to better manage the growing symptoms of Parkinson’s Disease. I say brave decision because the procedure was a three-step process which (in highly simplified terms) involved:

1) A 6-7 hour procedure where surgeons entered Dan’s brain and stimulated/tested areas of the affected area while he was awake!  (I still get queasy just thinking about that!) Electrodes were attached to key areas and a wire was inserted down the side of the neck in preparation for the second surgery which happened a week later.

2) The second surgery was similar in scope to a pacemaker application. A device was implanted into Dan’s chest and ultimately became the command center of the system. After completion of that procedure the wire, which was hanging out for the week inside his neck, was connected to the stimulator in his chest. Dan spent the following week allowing his body to “recuperate” from two back-to-back invasive procedures.

3)  The third week, (the final step of the process) involved “powering up” the system and determining which of the possible 40,000 combination of setting provided Dan with his most optimal performance.

Without going into too much detail, I will tell you that it was an emotionally, physically, and psychologically exhausting experience for our entire family with Dan as the patient, obviously, bearing the greatest burden.

There were so many acts of kindness throughout those three weeks. My friend Leesa sat with us in the waiting room during that first very long surgery. Our parish nurse Diane was also there and served as interpreter when the medical terminology became overwhelming. Liz and Edie brought meals. Family and friends phoned and texted words of encouragement.

But the act of kindness that brought me to my knees happened the day before I was to drive Dan to Baltimore for his early morning second surgery.

Not just any snow….. a blizzard that dumped several feet of a snow on Frederick County and created a WALL sealing my car into the back of our long, Main Street driveway.

I panicked! I couldn’t just call the hospital and cancel such an important surgery that took months to schedule! What would I do?

My sons did not live close by. My husband, at the time weighing all of 165 pounds, was relegated to the sofa with a recovering brain still feeling the aftermath of a surgery that made it difficult to even be in a room with light and sound.

And I do not ask for help.

That second confession bothers me much more than the first but it’s true. And that story is way too complicated for any blog post.

As I sat in our living room watching Dan recuperating on the sofa, I was numb with anxiety and worry. On top of an already stressful week, the blizzard conditions were just too much to handle!

And then I heard it.

I ran to the kitchen window and saw a team of adults and children digging out my car!

Two were my next door neighbors but several of them I did not recognize!

I quickly donned my snow gear and waded through the back yard in the knee deep snow until I reached the group.

So many of the details are now a bit blurred but I remember asking these angels to identify themselves! (I think I blurted out, “Who ARE you????) They replied that my friend, Cassie, unbeknownst to me, sent an email blast to some of her friends in our community and asked if anyone could help “a friend who needed help.”

And they answered the call.

After a hour of shoveling, our neighbor called for the heavy artillery and before long a plow appeared to open the entire length of driveway. It seemed I would be able to drive Dan to the second surgery that following morning after all!!

I ultimately made it back into the house to tell Dan what had happened.

Then I went upstairs into our bathroom. Shut the door.

We made it to Baltimore that next morning. My son who lives in Baltimore City had to walk to the hospital because the roads were so horrific. Some lanes on Rt. 70 were still closed. But we would have never made it without the kindness of neighbors and strangers.

Which brings me back to…..

Do you remember a time when an act of kindness rocked you to your core? Let that feeling and emotion be your guide when you think about how to recognize and serve others this week. There are people in our community who are hurting. And many won’t/can’t ask for help. Let’s dig deep as we show kindness, tenderness, LOVE, service.

Will you help me in creating a kindness tsunami in our community? Not just this week because it’s a worldwide proclamation. But every week?

P.S. And for the record…. since then, I’ve gotten much better at asking for help when I need it. In fact, you may notice I just did!